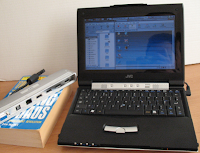 Around December 2005, I decided I had to take action before the heavy Dell 5150 laptop I lugged around did permanent damage to my spine. My final candidate for an ultra-lightweight, fully functional mini notebook was the JVC MP-XV841. Extremely compact at 9.2 by 7.0 by 1.5 inches, it’s not much bigger than a hardback book and lightweight at 3.2 pounds. The delivery spec (bottom) was better than the laptop I was using daily.
The 1GHz Centrino processor didn't set the world on fire even then, but how much horsepower do you really need for a mobile office? Okay, it's eccentric and compromises in strange ways; it has an external clip-on battery, the good news being the four-hours between charges; the VGA connector is on an external port replicator (along with a four-port USB hub). There's no Bluetooth and the tight, cramped keyboard, despite all the keys in the right places, is just a fraction too small for easy typing; long work is broken with regular trips to the Delete key. However, for such a small machine it has a fantastic screen which is extremely bright, pin-sharp and, in a wide-screen format of 1024 by 600, plays DVD’s perfectly using the built-in DVD/CD-RW combo drive. It has manual playback controls along the front edge, a volume jogwheel, brightness controls and keyboard lock under the screen. There’s even a button for surround sound.
By then it had been out for eighteen months or so, so the original (even more) outrageous price had dropped by half. I bought one for £639 Sterling, carried it around client sites for a year or so and it caught everyone's attention.
That was then...
Time passed. Eventually I bought another Dell dual-core laptop with Vista Ultimate, lived with it six hideous weeks then replaced the entire hard drive and operating system in favour of Ubuntu 7.04 (Feisty). That was my moment of conversion. As a Linux-watcher of several years, I knew the potential, this time I was sold on it. Another idea formed, but I held off until the upgrade to 7.10 (Gutsy), then went for the resurrection of the JVC.
It took some planning. I had always intended to upgrade the 40GB hard drive, but the ultra-compact size of the JVC was clearly the most challenging part of the exercise. More than most laptops, it isn't designed with user-upgrades in mind. Upon research, I found a single web page of instructions compiled by a couple of brave souls who had succeeded. The only way is to disassemble the entire machine, since the hard drive is the largest internal component and everything else bolts in around it.
In for a penny...
Jewellers' screwdrivers - check; magnifying glass - check; courage in hand - check. The disassembly took me back to car mechanics when I had no money but to do it myself. I had learned to punch a sheet of cardboard to hold and label the engine bolts, so I did the same with a sheet of paper to hold and identify the thirty-seven mismatched screws. In half an hour I had whole thing laid out across the table. If I hadn't built desktop PC's for myself and family for years I probably wouldn't have tried it. I didn't take photo's, it was too distressing(!)
While I had it in pieces, I went for the memory upgrade - both slots, 512MB apiece, to give me a 1GB machine. The 120GB drive went in and I reassembled it with only one screw left over. Still not sure how that happened...

I had used the Gutsy Live CD for various installs already, I knew it worked, but you know how laptops, especially of a certain age, have unpredictable combinations of hardware and firmware, right? I needn't have worried. Ubuntu installed almost flawlessly; it recognised the on-board 802.11 Wireless-G straight off the bat, connected to my router and... welcome 'JVC-Gutsy' to the web! Packages updated, themes and bookmarks applied, graphics configured - job done.
Workaday

For reasons best known to me and my accountant, we maintain my company accounts on an ancient version of Quicken. For that I need a Windows machine and that's what I've got; I installed VM Ware Server with my Windows XP as client. The on-screen real estate is limited but the performance is more than fine. I work with a minimalist desktop anyway, so creating a single Gnome panel was second nature. I currently use the Nimbus theme from Open Solaris, which is clean and highly legible. At most tasks, the JVC exceeds expectations, although I wouldn't try to redesign my web-sites without my external monitor plugged in. The only thing that still doesn't work is the Ricoh SD card reader - although Ubuntu recognises the Ricoh in my other laptop!
Four months on, suddenly everyone is talking about the Asus Eee PC as a full-spec Linux pocket PC. For the price, there's no question they've done a stand-out job. But for my money, my little JVC is simply a pocket battleship. I still take it on client sites and into coffee shops and it still gets everyone's attention.
JVC Mini MP-XV841 specification when delivered
Intel Centrino 1Ghz, 512MB memory 40GB hard drive, DVD/CD-RW, 8.9inch TFT, Intel Extreme Graphics 2 (64MB RAM), Intel PRO/Wireless 802.11b/g, 2x USB2 sockets, SD card reader, IEEE-1394/Firewire port, 10/100 Ethernet, V.90 modem, PC Card slot, Windows XP Professional
JVC Mini MP-XV841 specification now
1GB memory, 120GB hard drive, Ubuntu 7.10 (Gutsy).