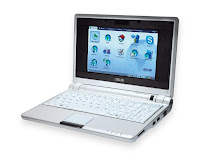 It's the machine that's responsible for opening up a new market segment betwen the business notebook and the ultra-portable One-Laptop-Per-Child (OLPC) at a price-point that makes it attractive for education and business and the casual user.

We've had ten of them on test to use and abuse, break, build and reconfigure. This is how we got on...

Quick verdict: A genuine next step for the laptop. Impressive capabilty for the price and ultra-low weight.

Its been a general rule that the smaller the laptop, the more expensive it is. But the Eee costs less than any full-size laptop you've ever seen.  We've had ten of these on trial at the current client site. Right out of the (tiny) box, the surprises keep coming.

Two: you can believe how light it is; everything is solid state, so the battery can do more work on fewer cells. Including its power adapter weighs only 1.12kg. The device on its own is a featherweight 928g.

Three: you can't believe how silent it is: there's no moving parts - no hard disk whirring and spinning; no cooling fan sucking and blowing air

Four: you can't believe how bright and legible the screen is - 7 inch at 800 x 480. Okay, after a while it feels a little cramped and the 7in diagonal is enough for only 18 lines of 12pt text in OpenOffice. But then you won't be buying this to work on mammoth spreadsheets. But it's bright, clear and reproduces colours well.

Five: you can't believe the specifications - a 900MHz Intel Celeron M ULV (ultra-low voltage) processor and 512MB of RAM. Its not a scientific benchmark, but even with Windows loaded, OpenOffice launches in seconds. We never experienced a slowdown even with multiple applications open and a web browser running a Flash-intensive website.

The pre-installed operating system is a custom job for  Asus, built on Xandros commercial installation of Linux. The tabbed main interface is great for novices, kids, people with fat fingers,  poor eyesight or otherwise loathing conventional computers. Anyone else might think the Xandros desktop looks a bit "Fisher-Price"

Along the top of the screen you can select from Internet, Work, Play, Settings and Favourites tabs, each with its own selection of applications and links to online resources.

The window furniture of each application is as standard as can be. The minimise, maximise and close buttons at the top right of a window appear to be a direct lift from Windows XP, but that familiarit should make the transition between Windows and the Eee's Linux desktop easy. Even better for children, delving into potentially destructive settings is all but impossible. None of the pre-installed applications even show up in the Add/Remove Software dialog box. You can force it into "expert" mode.

You get the full versions of both OpenOffice 2.0.4 and Firefox 2 pre-installed, although designated "Documents" and "Web". The Eee's aim is to make things as easy to use as possible. Firefox works exactly the same on the Eee, including handling rich websites such as YouTube. Mozilla's Thunderbird is also pre-installed, albeit under the "Work" rather than "Internet" tab.

For tapping out emails and working on documents and spreadsheets, the Eee PC is a good pocket-rocket. Talking of tapping, however, I hope you've small fingers, a lot of patience or really fine hand-eye co-ordination. Why? Tiny keyboard: I've got a JVC-mini with an identical keyboard and an identical problem. Each key has less than the surface area of a fingernail and I almost never get up to full typing speed on either of them and only with frequent 'deletes' as I mash two keys together. Bear with it. The trackpad is similarly restricted but works well.

So wheres the catch? Storage. The Eee has a 4GB flash disk instead of a conventional hard disk, and at 2.5GB Xandros, Ubuntu or Windos XP takes up over half that capacity. It's more than enough space for hundreds of office documents, but unless you invest in some SD memory cards, you'll never be able to rip much music or video for travelling, for instance.  Fortunately we haven't found any SD cards or USB flash drive that wouldn't work with the Eee.

W, W and W
Wireless wonder: connect to both wired and 802.11b/g wireless networks, You may need to do some fiddling with wireless drivers if you switch to a different Linux or to Windows XP.

Webcam: as an extra bonus, there's even a 640x480-resolution fully working webcam set into the top bezel.

Wow: so I;m cheating. The wow is for battery life - light use for 3 hours 31. Under a  thorough a workout in our intensive Linux-based  test the Eee ran flat-out for 2 hours 48.

Not to mention the other 'W'

For work purposes, the challenge has been to create a standard Windows XP build, slipstream it to a flash drive then install it without a hard drive to the solid state storage: with wireless internet, remote desktop and system management. It's hard work, but you can do it.

Build quality is easily good enough for the Eee to withstand its target audience of children. It feels unflinchingly solid, the keyboard has a reassuringly firm base, and there's virtually no give in the screen's mounting. The lack of moving parts - with a solid-state disk and the lack of an optical drive - make the Eee at least as shock-proof as its ultraportable competitors. It stood up well in our battery tests as well - running under .

Not bad for a slightly anonymous case design that looks like the Casio calculator's older brother. Its not a design classic like some Apple Macs, but frankly we don't care.

For the price, its THE machine to beat right now. You might consider a full-spec busines machine (a Sony VAIO VGN-G11 ramped up for Windows). Or just buy six Eees for the same cash, then the whole street can browse the internet, fire off email and upload pictures to Flickr. The Eee renders websites properly, comes with the number two office suite (knocking on Microsoft's door) and it's so portable I suspect a lot of ladies are sizing it up for smaller and smaller handbags.

The Eee was been headline news before, but now its definitely broken out of the education market into consumer electronics chic, the combination of price, spec and performance winning the critics over. For this price, how can you argue? RC