February 20, 2010
Original Article: 26/08/2008 appeared in Full Circle Magazine #17
Although it's not one of the core 'Buntu distributions, we've given Mint a fair share of coverage in the magazine this year; Linux Mint 4.0 'Daryna' was Flavour of the Month in Issue #10, with the follow-up comparison to Unbuntu in Issue #11, both favourable write-ups by Mr Clipsham that we won't repeat here. But now release 5.0 is out named 'Elyssa'

It's worth another quick look for the sake of three key things:
Before you say it's just another distro, bear in mind the hardware I've run it on;
Both trialled on a Belkin wireless USB dongle (spelt T-R-O-U-B-L-E in any Linux glossary...)

Elyssa freshly-minted...
Mint 5.0 is now based on Ubuntu 8.04 Hardy, which means all the underlying code, from the kernel to the utilities to the applications are the latest. That includes Gnome Desktop, Open Office and Firefox 3. 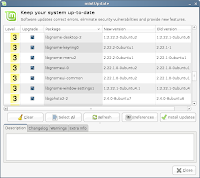 Booting from the Mint Live CD, it uses the standard Ubuntu installer. If you follow the default steps through the install wizard, it just works. Once you're up and running, the Mint Updater connects to the Mint repositories to bring everything up to scratch. The Updater shows you what it's up to and rates the packages on a scale of 1 to 5 according to importance and compatibility. The updater icon (a padlock, strangely) resides in the Gnome panel.

Elyssa, pretty as a picture...
I know it comes down to personal choice, but if you don't like Ubuntu brown or Kubuntu blue, then the default Mint theme of green and black will come as a pleasant change. Mint includes the restricted drivers for NVidia and ATI cards (handled by Envy) and again, it just seems to work. I expected the graphics to be fairly shoddy on my elderly Compaq machine; but no, its pin-sharp, all the resolutions and all the colours and on the basic settings (without 3-D effects) faster than you'd expect. If you don't like the theme, the Mint project thoughtfully provides a bookmark to it's own version of gnome-look.org pre-filtered for the Mint distro, so you can have confidence all the themes and engines work for Elyssa. So what?

The Mint main menu is laid out clearly and wouldn't put off a newcomer used to a Windows Start Menu. Which brings us on to the last point... 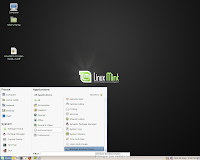 Get this – two separate installs on old hardware and I haven't had to go to the command line AT ALL. For me, this is a major triumph, as I got the Wireless USB dongle to work with no intervention. The Pentium-IV picked up native Linux drivers and connected to the router from the get-go. The Compaq was a different matter. I've had no end of trouble with USB wireless adapters mainly because they rely on using ndiswrapper with the windows driver software that come with the USB stick. I can spend hours messing around in a terminal trying to set these up - and I mean in current distros.  Not in Elyssa. In the Mint menu, there's an entry for Wireless Windows Drivers. When I  launched this on the Compaq, it suggested what driver to use with the chip-set detected. One click to accept and the installer did the rest on its own. It just plain works. I know it's just a clever bit of scripting sitting on top of the networking provided in Ubuntu 8.04, but this comes as such a refreshing change, you wind up asking why all Linux distros don't have this. 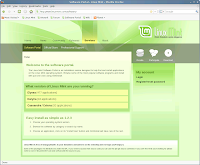 Mint comes with most of the common multimedia codecs for music and video already installed. If there's more software you need, the Mint Installer (shortcut: "Software Portal" in the Mint Menu) offers a sort of Google search for a particular program. If found, it will take you to a website that lists the package, a description and gives an "Install Now" button. One click will download and install the appropriate files and you're flying. Again you could say 'so what' but does the new Linux user want to rummage about in repositories or Synaptic? 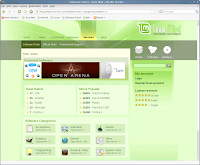 Surprisingly, Mint feels quicker and smoother than a standard Ubuntu install on the same low-powered hardware. Give this to a Linux newcomer, you won't need to spend hours explaining everything. Actually, the Mint bookmarks provided with Firefox are a great place to start. The Linux Mint Forums are a very friendly place to visit, second only to Ubuntu. Newcomers are made to feel very welcome. The Mint Blog and newsletter keep the Mint community up to date. It's not going to replace my main Ubuntu 8.04 set-up just yet (too many customizations in mine), but  Mint 5.0 Elyssa is a usable out-of-the-box desktop distro. If the Mint team keeps raising the bar like this, all the other distros will have to take note and go with them. Then we'll all get the benefits. RC