Sound vs. Vision - Audacity vs. nVidia 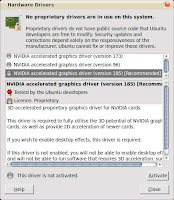 The good news is: I have reduced my Audacity crashes by 80%...
The bad news is:   I did it by removing the proprietary nVidia drivers!
I had long suspect that Audacity's GTK front-end quarrels with the proprietary nVidia graphics drivers BUT ONLY on my Dell laptop. The nVidia card in this Dell was never rated as great, more of a workhorse, with some  hardware implentation issues  somewhere along the way. How did I make the link?
I noticed in System Monitor every time Audacity crashed, that Xorg was running running between 82% and 102% on cpu2, while Audacity sat there doing nothing on poll-schedule-timeout while still consuming 40% to 98% cpu (the Dell is dual-core). Hit end process on Audacity and Xorg drops to 2%. Clearly the PC is tying itself up in knots trying to resolve some front-end issue. I haven't so far traced any similar cases or bugs reported.
I don't know  the why or the how, but removing the proprietary nVidia drivers cut the crashes by at least 80%. By crash I mean total failure, unrecoverable (and Audacity is the single best program I know for recovering crashed project folders) and with partial or total data loss! I can't account for that.
Now, on the bundled Ubuntu drivers, I still get the odd infrequent crash, which I attribute to the gpu in the Dell, but Audacity recovers properly once again.
More research required...  RC