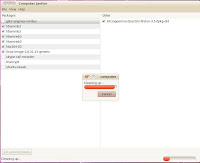 Congratulations, you have now TRASHED your Ubuntu installation!!
I don't want my system more like a freshly installed one, I want it working the way I installed it! This is a half-baked, un-documented equivalent of a software anti-personnel land-mine with no flag!
DO NOT USE THIS unles you know exactly what all the libraries and binaries are for on your system - particularly if you're relatively new to Ubuntu...
Computer Janitor 'cleans up' unused .deb packages which increases the amount of free space on disk and supposedly increases your machine's overall performance. Deb packages are generally so small, this is negligible.
Computer Janitor is located under System > Administration > Computer Janitor.
The interface of Janitor doesn’t explain to a user what it intends to do. Actually, I'm not even sure how it decides what it wants to do. In my example the Janitor wanted to remove Ubuntu Tweak, Skype Call Recorder and TrueCrypt because they were installed via 3rd party PPA’s. It's made a selection of old packages and binaries, presumably orphans without dependencies, but WHO KNOWS?? There's nothing documented!
‘Do Selected Tasks’
'Do' what?? What selected tasks is it offering to ‘do’? There are no on-screen instructions, no warnings, no confirmation button.
I don't even think it's useful for getting Ubuntu back to a pseudo-fresh install state. Many users will assume it’s a ‘CCleaner’ type application and just run it.
DON'T.  RC