Following on from an earlier posting and the discussion in Full Circle Podcast #4 on backup solutions, I took another look at this handy little utility (often shortened to Sbackup), not used by me since the days of Edgy Eft.

Although it's called Simple, you'll find that in function it covers most of what you need; full and incremental backups, include and exclude criteria, backup destination and timing options (manual, timed and auto). Going down the custom configuration route gives you as much control as many larger backup applications.
Simple Backup consists of two separate programs: Simple Backup Config (which configures and performs your backups) and Simple Backup Restore.

The Backing-up part has a simple tabbed interface.

On each tab there is a 'Backup Now!' button to initiate a backup job. This creates a scheduled cron job which kicks in at whatever time you specify, so the Now! part means 'use whatever the current criteria are across the parameter tabs.' Cron then takes care of running the job.

I set a full backup running on the Compaq which cranked through 1.3Gb of data in a little over five minutes.

What this generates is a backup folder named after the job you specified : (2010-04-29_18.54.02.041071.
EvoN610.ful), date-time stamped and sequence numbered, with the machine name and backup type. In this folder is a collection of files which describe the backup and the machine state - file-list, partitions list, excludes list, a package list (all the deb's on the machine) and most importantly, the backup archive file itself, files.tgz.

It's a standard .tgz archive with full file and folder paths specified. I can use it with any archive manager, not just Simple Restore. This archive naming is the only dumb thing Simple Backup does - why not name the .tgz file the same as the folder? 2010-04-29_18.54.02.041071.EvoN610.ful.tgz is far more meaningful and useful to me than just files.tgz! 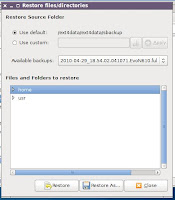 The Restore application is even simpler, consisting of a single window for specifying the backup set location, the set to use and either 'Restore' or 'Restore As...' if you wish to restore the backup to a different location from the original. Restore unwinds your .tgz file as fast as your archiving engine allows - in my case just over three minutes for 1.3Gb.

Verdict
Simple Backup does the job. It backs up with all the options I need, using an open format I can pick up and take anywhere; it restores; it has a usable interface I can point and click. I don't need to remember where to find anything or any estoreric commands or terminology. I could get by with this very easily.  RC