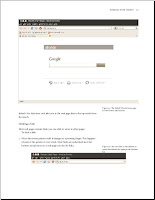 I love that the Ubuntu Manual team has got the manual together, we now have something that didn't exist before. I know Mark appreciates the effort, I saw the name-check for Benjamin Humphrey in the UDS video!

As for the manual itself, now we have one to touch and feel, I've exchanged ideas with Benjamin only to find most of them are already in the plan for the next release...
It may seem harsh, but I've had experience writing these things for software projects in the past. I don't know what debates and compromises were agreed along the way to this edition and I'm sure there's a bigger plan for the next one, but for what it's worth:
Who are we aiming this at - who is in our intended audience?
I think you need to look again at intended audience, because right now not enough people will get past page 4.

And finally...
Colophon
'Colophon' !!!??? Seriously??? I know it may be correct, but now you're just showing off...  And I could go on. How long have you got...?  RC
Editorial Response
To which Benjamin already replied:

Good feedback. The cool thing is that we know most of that, it's not something new that we're not aware of. The next release is going to be rocking, mainly because we will have this: the Ubuntu Support and Learning Center.

Have a good read and you'll see that we plan on fixing most of your gripes as a by-product of having more formats.

I saw the Learning Center and heard the podcast piece on persona's around which to base future manuals. Excellent ideas both.