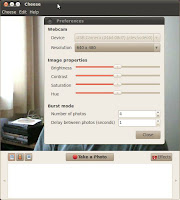 "Cheese is a cheesy program to take pictures and videos from your web cam. The project also provides some graphical effects in order to please the users play instinct. Furthermore some integration work will be done to include it in some other programs and services."

Cheese is a GTK/Cairo/Gstreamer -compliant program which integrates well with Gnome. It allows you to grab stills, sequences or motion video from your webcam. Useful for screencasts, webcam testing and set-up, or just amusing the kids (or yourself)...
Originally a Google's 2007 Summer of Code project under Daniel G. Siegel.

Features of Cheese include:


It has a very simple GUI interface with next to nothing on it; Effects are toggle buttons, click once to apply, click again to remove.

It's not an edit suite, it's not a web-conferencing application, it doesn't manage all your sound and video settings. Grab what you need, export it, work the content elsewhere - GIMP, PiTiVi; whatever. You could use it to make your own stop-motion animations, for example.

In Practice
I ran this on the ancient Pentium 4 2.4GHz with 1Gb RAM and NVidia GX graphics card. Using an elderly Logitech 640 by 480 max. resolution webcam, I got perfectly acceptable motion video and stills capture. The Preferences dialog allows you to adjust brightness, color, hue, saturation and the like to get a decent picture. It won't make you look like a film star.

Verdict
Works for me, the first webcam I've had to use on Linux. Simple interface, basic set of features, fun, useful (if slightly wacky) set of effects - I can see some really cheap pop videos being made on this. Like it.

.OGV isn't necessarily the most useful format, a choice of default would be good. The jpeg is a standard still format; bear in mind the resolution of the webcam is all you'll get.