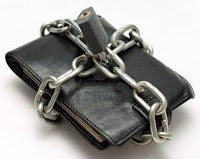 Cheapskate: "a person unwilling to give or spend money; stingy person."
Frugal: "not wasteful; not spending freely or unnecessarily; thrifty; economical."
"A cheapskate is someone who takes frugality to the extreme. Instead of trying to make the most of his or her resources, the cheapskate refuses to spend money at all..." (Love-to-know)

To you, cheapskate may be an insult. To the Professional Cheapskate, it's a badge of honour, particularly when applied to utilities, toys (computers, software and phones), financial products...


By any decent 'geek measure', I hang onto cars, phones, TV's and computers too long. By the measure of the Professional Cheapskate, I get maximum value for money over the longest time. The trick is to ditch a product in it's twighlight period, the tipping point after which it starts costing over-the-odds.

I recently did a film job which went on so long they paid me for four haircuts. My father (Professional Cheapskate First Class with Honours) was incensed. The idea that I get paid for haircuts when he has to fork over money...

Your objective is to outwit 'the man.' Remember that 'the man' - anyone from corporate scheister to an actual man in the corner store - is out to part from you as much of your money as he can get his hands on.
I regard shopping for anything as a challenge. It usually follows this pattern:

The Reward System
This is not to say you have to forswear all luxuries and live the ascetic life of St. Francis. The point of all this is to make your resources stretch further so that when you do 'splash out' on indulgent purchases (still following the rules as far as you're able) you get the extra satisfaction of knowing you've earned it and you're not running up the budget deficit of a minor Euro-zone country.

Which brings me to the self-justification part of this post: I just ordered a shiny new Android phone...  RC

"Beware Greeks bearing gifts: they will be closely followed by the bailiffs with a repossession order. Then by the IMF."