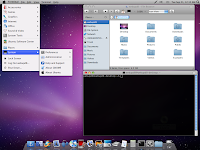 As if it's not enough that Ubuntu is itself going for a Mac look-and-feel - I direct you to recent releases in which features to go Mac-like include:
but some people seem to need to go the whole hog and re-style their entire desktop as Mac-buntu...
Ok, I get it that the Mac way of doing things in the user interface is widely admired (and much copied, pending lawsuits). But surely the reason you went Open-Source is to avoid the closed and increasingly dictatorial corporate software crypto-facist capitalist states?

We'll skip over the cheap-skates who want to try to pass off their no-name PC clones as expensive Mac's to their less knowledgeable friends. You know who you are.
But why, when you have the highly functional Gnome desktop environment, the shiny KDE, and the lightweight Xfce and Openbox desktops; why would you want to transform your Linux into a wholesale Mac-clone? Any more than a Windows-7 clone? Even down to the Apple and Windows logos??? And there are dozens of these 'transformation packs' around. That I don't get.
The current Linux distros have user interfaces with infinite customisations to be proud of, show them off!  RC