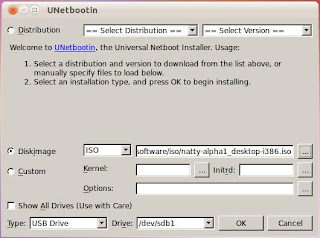 Your first question may be 'why do I need this?'
Answer: when you need to create some bootable media for utility use – say a system rescue on a sick PC or just to try out a new or updated distribution without installing to the hard drive. You don't need to remember a complex set of command-line instructions as this is a convenient graphical user interface to do the job for you.
'But surely, I've got Startup Disk Creator in Ubuntu, I don't need another boot utility?'
'Unetbootin does much more. And don't call me Shirley (in memoriam, Leslie Neilsen, RIP)...'
I see two advantages over Startup Disk Creator:
Unetbootin is available from Synaptic or Software Center. It's a small install which should be added to your System Tools menu group. Fire it up and you get a single control panel as illustrated.
The top half I call the 'outreach' utility. It allows you to select and download the image for a number of Linux distro's on the fly. Need a copy of System Rescue CD for diagnostic purposes? Fancy a go at the current Kubuntu with KDE 4.5? This program goes and fetches them for you.
The bottom half is for the convenience of the 'home-bake' enthusiast; point it at a CD or ISO image you already have, that's straightforward. There's also a Custom option where you can specify a kernel version and bootloader config. If you don't know what that means, there's a research project for you, else don't bother. You'll need to be a mid-level kernel hacker to get the most out of this, but if you are, I can see this is a useful labour-saving option.
Last of all you specify the target media for your boot image – the 'Show All Drives' option is rightly labelled “use with care” as this tool will let you zap your primary bootable hard drive if you're daft enough to tell it. USB thumb-drives come top of the list, but you could just as easily make an external drive bootable or burn optical media.
The good, the bad and the downright ugly
I like this. It's easy, it's quick – a 1GB USB key is ready in under a minute – it appears to be more reliable and consistent than the Ubuntu equivalent. The list of downloadable ISO's covers the majority of current main distro versions, but not on the cutting edge; Ubuntu 11.04 Alpha I had to fetch myself. As it's one of those over-size ISO's that won't fit a CD but happily goes on a USB stick, this was a fast and simple way to get going. And by way of example, the version of 11.04 written by Startup Disk Creator doesn't always boot, but my Unetbootin version does.
It's not perfect however. Various third-party tests have shown that UNetbootin doesn't always manage to download the full distribution, and when it does, not every combination of PC hardware will allow a boot from a Unetbootin-written image. Don't forget the BIOS settings must allow USB, optical media and secondary drive booting if that's what you're asking.
And please, don't accidentally hose your primary hard disk with this thing; you're still the driver art the wheel.  RC