Some time ago I loaned my old Toshiba Satellite 2610 to a friend in need of a laptop. She's just bought a very shi-shi Dell Mini-10, so I got the Tosh back. It went out with Windows 2000 and came back blank.
It's still serviceable, if under-spec'd by today's standards. First action was to replace the original 6Gb disk with a spare 20Gb unit. I don't have any spare memory of the right type so it stays at 196Mb.
Next step: install Linux. This is where things fell apart. My favourite Live CD's were reluctant to load in this small a memory. I got as far as Ubuntu 9.10 desktop but nothing newer. Oddly, the Lubuntu 10.10 Live CD wouldn't start at all. Secondly, none of the Ubiquity installers wanted to run in this little memory either. Including Lubuntu. I still can't get the CD-rom drive out in favour of a DVD drive and the BIOS is so old it won't boot from the single USB slot. Time for some lateral thinking...
Brain-wave 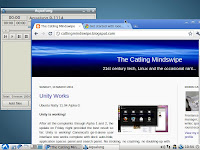 With the 20Gb Tosh drive attached via USB-2 connection, I tried plugging into a Virtualbox VM in the hope of installing Lubuntu directly onto it in the VM. Despite using a good set of work-round instructions, V-Box didn't want to use the USB'd drive as a primary physical drive. It was a round of trouble-shooting too far for a late night.
Following morning it occurred to me I could use a machine with an older processor (avoiding kernel and driver issues) and install the Lubuntu Live CD onto the drive via USB, then replace it into the Tosh to use as the boot drive.
Remembering to format the drive to include a swap partition (Ed Hewitt take note!), the install went smoothly, a swift re-plugging later and... ta-da, a beautiful Lubuntu 10.10 OpenBox desktop fires up. Unexpectedly quickly. With the bonus of the old 3-Com wireless PCMCIA card donated by Matt Grove working like a charm out of the box. RC
Toshiba Satellite 2610CDT
• Intel Celeron processor at 433 MHz
• 64MB SDRAM standard (expanded to 192MB)
• 32KB Internal cache, on-die 128KB level 2 cache
• 6Gb (upgraded to 20Gb) hard disk drive
• 24x CD-ROM drive and floppy drive
• 12.1" diagonal, 800x600 TFT Active Matrix colour display
• V.90* Data/Fax modem, ring wake-up resume