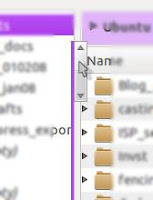 Ever since they arrived in the test versions of 11.04, I've hated the new Overlay Scrollbars in Ubuntu.

So I'm starting a campaign now to get the regular scrollbars back!

Here's how to disable the overlay scrollbars in Ubuntu 11.04. Simply open a terminal and copy/paste the following commands:

Then restart your x-server (a re-boot will do the trick).

If this solution doesn't work, you can alternatively remove the overlay scrollbars packages which will eradicate all trace of them (so any other users of your machine will lose them permanently too):