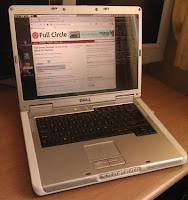 The Dell Inspiron 6400 (also sold as the Inspiron e1505) is currently my main machine. We remain locked in the love-hate relationship we have shared since I bought it in 2007.

Its wasn't the cheapest Dual-Core Centrino laptop at the time, but a good, solid, mid-range workhorse...

The original specification:
I don't rave about the looks of my gadgets. The D6400 was OK in it's day, silver lid and keyboard bezel on top, black below with vaguely Mac-ish white trim. It always struck me as a bit cheap-looking and trying too hard to ape something else without getting sued.

Vista Ultimate (Disaster)
Yes I paid extra for the Ultimate edition. Yes I feel thoroughly cheated that I got nothing for the premium price except a bloated hog of a software stack that was so abysmal in both design and performance that I lasted six weeks until I got rid of it. Vista on the D6400 runs about the same speed as XP on my old Pentium-4.

Likes
Screen: it's a good screen, but not a great screen. Colours and brightness were never quite right for my eyes and the ambient lighting makes a big difference. On the plus side the font contrast is good. There's no ghosting. I've no dead pixels yet, so we're doing well. The screen was one of the early reflective models, supposedly good for DVD playback. But only in low light; outdoors it's hopeless. Just hopeless.

Touchpad and buttons: these have lasted remarkably well. I don't use a mouse much with this.

The keyboard is fairly positive, not too light. The big square keys are satisfying to find and hit with reasonable travel.

Any Port: thanks to the large chasis, I've never struggled to plug anything into this beast; it has two USB 2 ports at the back along with S-Video, VGA, modem and 10/100 Ethernet connectors, with a further two USB 2 ports and mini-FireWire to be found at the right.  The 5-in-1 built-in card reader reads al my camera SD cards, and there's an ExpressCard/54 slot which I never had to use. There's a reasonable CD-DVD-writer combi drive that still works.

Performance: Dell sacrificed games-playing ability in an effort to keep the price down. Since I'm not a game-player I didn't mind. I never found it's performance that blistering, unlike the Dell fanboys who wrote it up as a thoroughbred. I can get by with it as a desktop replacement however, but only because I ditched the Windows Vista it came with. It's been Linux all the way since week seven.

For video and audio editing however, I had to upgrade the memory, first 2Gb and in January this year, to 4Gb to extend the useful life of the machine.

Video: speaking of video, the dedicated nVidia GeForceGo 7300 is a comfortable middle-or-the-road performer that copes with most HD video in all formats. Not being a game player, I can't say for game performance.

Networking: the 802.11a/b/g wireless adaptor has always worked with everything (despite being a Broadcom chipset). The aerial in the screen bezel is clearly large enough to cope with the signal attentuation in most steel buildings – including my house. I've used Bluetooth a handful of times and it always worked.

Dislikes
Weight: it's lighter than my previous Dell Inspiron (the big blue and silver things they used to use on Stargate that weighted the same as a couple of dry-stone blocks), but still dents my shoulder after 20 minutes carrying it. That's with or without the useless battery (more later). It's a big, solid lump, a 2.85kg weight and 39mm in height but feels thicker.

Battery: the battery that died after eighteen months and wasn't on the Dell recall list – the list I didn't find out about until after  it closed. The battery wasn't great when it was new, worth about one hour thirty to on hour forty, whatever you were doing, mostly because Vista is such a hog. Under Linux it was better by about twenty minutes. All that is irrelevant now the battery is so broken it goes from 100% charged to zero in about seven minutes.

Heat: this laptop gets warm, just like every other laptop, especially on the underside towards the back. I can't put it on my lap without something sandwiched between to take the heat.

Noise: the CD/DVD drive is noisy and vibrations through the keypad area. The hard drive has a tolerable whisper. The main fan has three stages, unnoticeable, noticeable but tolerable and 'an ungodly racket'. Fortunately stage three never lasts more than a half to a minute.

Construction: how I've managed not to scratch it to hell I don't know. The lid and the white bumpers along the edge have a cheap plastic feel. The chasis is also cheap plastic, you can feel it give along the vents and undercariage. Fortunately all the joins are well mated, the lid is firm and the clasp is sound.

This machine has a very mixed reputation. A lot of the 2006 models appear to have fallen apart out of the box, keyboards, trackpads, screen hinges and bezels. Mine is still solid, but then I stopped taking it out the house after the first year.

Sound: the four speakers are poorly placed, lack bass (thanks to that plastic chasis) and the front pair become completely useless if you're typing and cover them with your wrists. That's why I always plug my desktop speakers into the headphone jack in my office.

Verdict
I keep saying no more Dell machines - but then I got a Dell netbook that was going cheap, so that went by the board.

The 6400 has been a good workhorse, with decent performance (until I edit video) and a screen I can stand to look at all day. RC