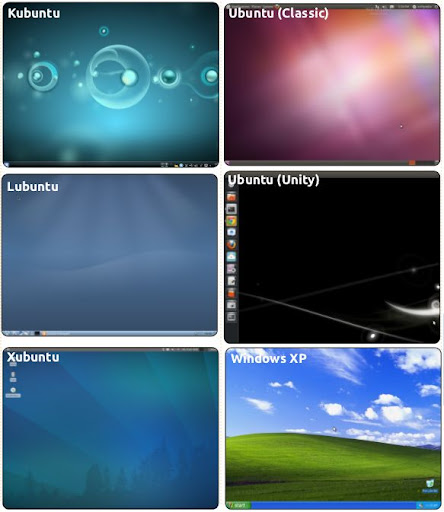 In this new section of Full Circle, I’d like to show certain features of Windows (XP in this series of articles, as I feel it’s the most widely-used edition of Windows) for the sole purpose of showing beginners their *Buntu equivalent. I say *Buntu as I will not focus solely on Ubuntu - I will also include Kubuntu, Lubuntu, and Xubuntu, as they each have their own way of doing things due to each of them using their own desktop manager (Gnome/Unity, KDE, LXDE, and XFCE respectively). 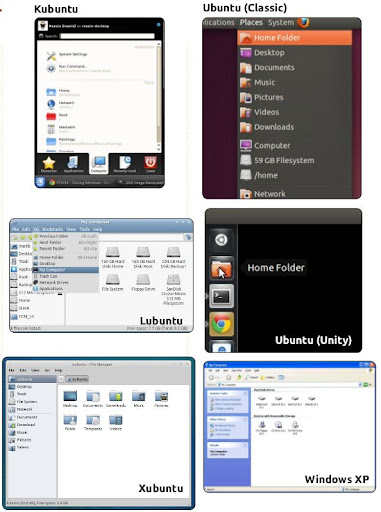 Desktop
Windows XP has its familiar blue and green taskbar with a particular style and layout on each window that is opened. That is the Windows desktop. Each version of Ubuntu has its own desktop. Gnome (and Unity, the Ubuntu-only front-end to Gnome) has a different way of doing things compared with KDE (used in Kubuntu), but each version (or derivative) has the same underlying Ubuntu foundation. So, whether you install Kubuntu or Lubuntu, you’re still using a version of Ubuntu; it’s just that the desktop looks, feels, and works, differently. For each Windows feature that I discuss, I’ll attempt (with the help of my co-authors) to show how things are done using the four most popular desktops as mentioned in my introduction.

C:\ and My Documents
Every Windows user is familiar with the ‘My Computer’ icon. Double-clicking ‘My Computer’ on the Windows desktop/menu presents a window showing your storage devices such as C:\ and any USB media. 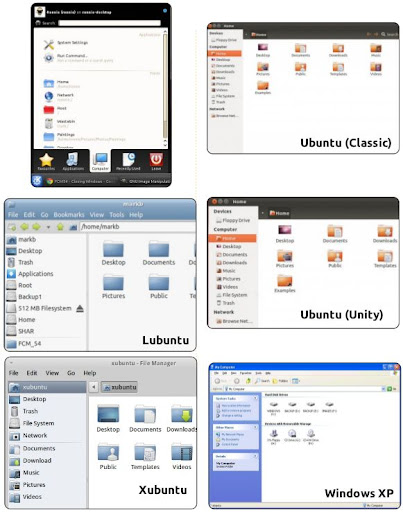 Kubuntu has a similar option in its menu. Clicking the K button in your bottom taskbar will give you a menu with tabs along the bottom. Clicking the ‘Computer’ tab will give you access to your storage devices, just like in Windows’ ‘My Computer’. As does Gnome - you simply click the menu Places in the upper panel, followed by the choice: Computer. Unity (which is still under heavy development as I write this) does it by clicking on the ‘Home Folder’ icon in the launcher on the left hand side of the screen.

The icon is an orange file folder with a house on it. Ubuntu will show the root of the hard drive on the left hand side, along with other storage devices and favorite folders. In the right hand side of the application, it will show the folders inside the currently logged-in users personal home directory.

Open the C:\, and you’ll get a list of folders including things like ‘My Documents’, ‘My Pictures’, and so on. Linux (which is what Ubuntu is based around) works quite differently in this respect. The Linux file system has a ‘root’ folder. Think of that as your C:\ and your Windows folder. In other words: don’t tinker with them! One folder in root is called ‘home’. This home folder is where each user gets their own personalised folder - which Ubuntu (Classic) Kubuntu will contain all their stuff. You could, in essence, think of your personal home folder as your own C:\ drive, but, like Windows, your home folder has a list of pre-made folders for documents, video, and so on. Again, like Windows, you’re free to create whatever folders you like in your home folder.

Clicking K > Computer > Home will give you the Kubuntu equivalent of the C:\ drive. For Gnome, you click on the menu Places again, this time followed by Home Folder, and in Unity it’s done in the same way as before - click on the ‘Home Folder’ icon in the launcher. Also you can search through your files and folders by clicking on the ‘Dash Home’ icon in the launcher. Once inside the ‘Dash’, click on the ‘Files and Folders’ lens. It is located at the bottom center of the ‘Dash’, and looks like a piece of paper with the top right hand corner folded over.

Lubuntu has no exact equivalent to the Windows “My Computer”. In Lubuntu, all access to storage devices (network and local devices) is done in the File Manager (called PCManFM). The File Manager, which is found by clicking the Lubuntu logo on the taskbar and selecting Accessories > File Manager, has two panes; all available local storage locations (drives and partitions) are displayed in the left pane above the horizontal divider.

For Xubuntu, you double-click on the the ‘Home’ icon on your desktop to gain access to your storage devices. its own equivalent of explorer. All equivalents to the My Computer the folder (or Home in *Buntu) are shown right.

Windows has a special folder called 'Program Files' and it's in here that most Windows applications are installed. Linux, again, works differently. It installs applications in either your home folder (so that only you can run the application), or in the root (so that several users can run it), but, either way, the application is installed to hidden/restricted folders. Don't worry about this for now as we'll get to installing applications in a later article; but suffice it to say that you shouldn't manually delete applications as, just like in Windows, it can cause instability. 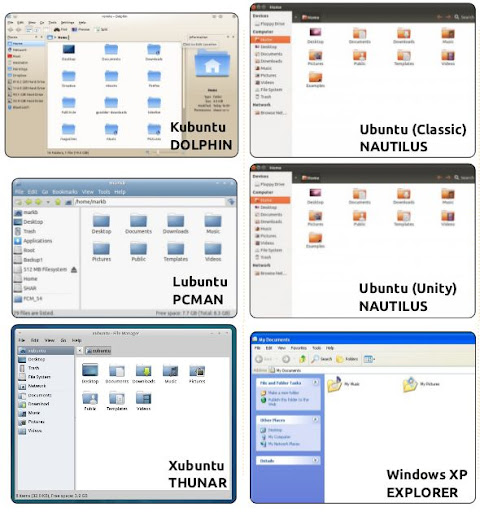 Gnome has Nautilus. Clicking the Gnome icon in the taskbar, then System Tools > File Browser, will show you the Gnome (Ubuntu) equivalent of explorer, and it will, usually, open by default in your home directory. Unity does this by, once again, clicking on the ‘Home Folder’ in the launcher on the left side of your screen. You can go back to the root and explore there if you wish, but try and change anything and it will ask you for a password. This is to prevent accidental deletion of critical files. It’s also called the ‘root’ password. Think of it as being like the administrator password in Windows. Once it’s entered, you have ultimate access to the file system and could, in theory, wreak havoc. Kubuntu has its KDE equivalent of explorer called Dolphin; it’s found by clicking K > Computer > Home (or K > Favorites > File Manager) on the taskbar.

Lubuntu (using LXDE) has the File Manager, and it’s found by clicking the Lubuntu logo on the taskbar and selecting Accessories > File Manager. Xubuntu (XFCE) has a file manager called Thunar - which can be accessed by clicking on the Xubuntu mouse icon at the top left your your screen and going to Accessories > File Manager. Like Windows, you click the X icon in the corner of the window to close it - with the other two icons letting you maximise and minimise each window. With Unity, the buttons to Close, Maximize, and Minimize, are located on the top left of the window when it is not full-screen, but, once the window has been maximized, the buttons will be hidden in the main panel in the top left hand of the screen. You have to move your mouse pointer up to the panel for the buttons to reveal themselves.

We could devote an entire issue to the items within Explorer and the *Buntu equivalents, but have a look at the menu items in your desktop’s windows. Most of the items are quite self-explanatory, and I’m sure we’ll touch more upon them in future articles. Next issue, we’ll talk about the *Buntu equivalents for the ever familiar Control Panel and Device Manager. RT