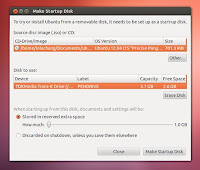 No, that doesn't mean keep trying to get Ubiquity to load; it's actually quite good these days, even if the 12.10 testing images are a bit, ahem, broken...

Rather, if you boot from a USB drive into Ubuntu as a Live Session (that is, not installed to the hard disk of a machine), you can opt to create a local storage area on that USB drive on which to store session information, additional applications, your profile and some data files.

Persistence is just a feature that the live session gives you when enabled during the creation of a bootable USB key using Startup Disk Creator or another tool such as Unetbootin. It creates a file which stores all the settings throughout the live session; files created, system log files and everything that will be normally remembered by a PC from session to session. Otherwise, at the next reboot, your live session everything will be lost.


Persistence practically gives you the ability to have your pocket Ubuntu, within the limits that a system running on a USB key has - capacity, performance, and an effective limit of the number of read-writes of the device.

When you create the USB key, you can open it in Nautilus file manager and find a file named casper-rw, that is the persistence file.

Besides a copy of Ubuntu-in-your-pocket, it is a useful testing platform, because it stores all the log files, keeping track of bugs, so if your session crashes or freezes, you can reboot and see what caused the problem, all without screwing up any installed software on the host PC.

Creating Bootable USB flash drives
A guide can be found on the Ubuntu community help site. For the basics:


To start Ubuntu from the USB flash drive, it needs the Ubuntu system files from the CD-ROM image, and it must be be configured to start up, or "boot", your computer. There are many guides for doing this on the web, but the easiest way to do the whole thing is to run the Ubuntu usb-creator program. Versions of this are available for Ubuntu and for Windows.

Booting the Computer from USB
That should be enough to get you going. Further guides to Startup Disk Creator can be found under How to create a bootable USB stick on Ubuntu. RC