Opinion: GNOME is not Doomed 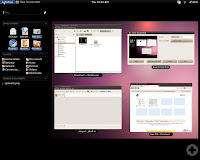 I found a story on my regular news roundup: GNOME’s Future: Open Source Desktop Interface In Doubt? by Christopher Tozzi which stated "the project responsible for what has been one of the open-source world’s most popular desktop interfaces for well over a decade, is teetering on the edge of crisis mode."

Which would be worrying, until you read on: "...at least, that’s what one developer suggests in a recent personal blog post ominously titled “starting into the abyss.”


It's true there's been a torrent of criticism since development of GNOME 2.x ended in favor of GNOME Shell, a cumbersome, buggy and resource-hungry replacement. Not only have competitors arrived on the scene such as Ubuntu's Unity  and Mint's MATE and Cinnamon , to sit atop Debian/Ubuntu derived Linux, some key contributors have moved on, possibly leaving the team understaffed.

You might agree with Otte, that the project “has no goals” in that it lacks a clear set of objectives for shaping ongoing development efforts, but I am more of the opinion that this is a cyclical rise and fall of effort in one of the longest-running Open Source projects of the weight of LibreOffice and Firefox.

The Evolution email client and Banshee media player are unlikely to fold even if the parent Gnome Desktop goes into decline.

What Gnome needs to do now is iterate in the same way that Canonical iterated Unity; remember what an unpopular and devisive desktop envirnment that was when it first appeared.

It may be that GNOME Shell aims to be an interface for smartphones, tablets and other mobile devices beyond the Linux heartland, and all that while the core Desktop project is far from polished. Consolidate, iterate, fix the things that Gnome Shell, as the path finder, got wrong that Unity learned from and corrected; and don't ignore the grass-roots that current flavours-of-the-season, Cinnamon and MATE are capturing. It's not over yet. RC