This manual is intended for users new to Ubuntu coming from from other operating systems and also user who are upgrading from Ubuntu 10.04 LTS. It is a manual produced by the community for the community. Due to this it available free of charge and is distributed under the CC-BY-SA 3.0 license.

It covers all elements of the Ubuntu world starting from preparing your computer for installation, using Ubuntu to advanced topics. It guides a new user into the world of Ubuntu. An entire chapter devoted to working with Ubuntu effectively covers some of the key features of Ubuntu 12.04 like Virtual Workspaces, Unity Desktop, Spread View and Switching between applications.

You can get it directly from the Ubuntu Software Centre! 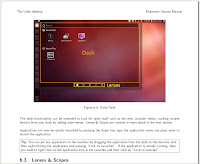 Released under the Creative Commons license by a team for whom English appears not to be their first language, Muktware's Ubuntu Manual is another attempt to produce a manual for new users. Like all the beginners manuals, does the right thing in principle; About Ubuntu, Why Ubuntu, Who is behind Ubuntu, Ubuntu Releases, Contributing to Ubuntu.

In practice, the chances are, if you've got it, you know a lot of this, or you've been recommended it and dont give a toss, or you just want to get on with it. Why can nobody produce a fly-leaf PDF page with a little infographic and hot links to skip to the section you want - in this case Chapter 4 on page 11, Obtaining Ubuntu followed by Chapter 5, Installing?

Part II, Using Ubuntu, gets into its stride, with an overview of the Unity desktop, the Launcher and HUD. The manual has some slightly strange page layout and breaks and eccentric captioning. It's not a particularly great explanation of the HUD either. The Software Centre is much better explained, with warnings in the appropriate places.

Next there's a whole section on Terminal basics. This is well written and presented content, but I'm in two minds about terminal use. Who is the audience for this manual? Do you stick to describing the graphical interface - after all you can do 95% of common tasks via Nautilus including setting ordinary permissions. Or do you acknowledge there are quicker ways for the technically competant and live in the real world where the Linux terminal still exists? Taking that second option, Terminal Basics works in context.

Advanced Topics then goes off the rails a bit, installing alternative desktops; actually one - Gnome Shell. Does anyone run Gnome Shell on Ubuntu? Any new users?

Working effectively using Ubuntu then talks about Workspaces. Surely this belongs in an earlier section? Switching between applications, Unity keyboard shortcuts? Next comes Customising Ubuntu - installing lenses and scopes, third party applications and customising the appearance. The Privacy Manager also gets a mention.

Part III Getting Help contains pointers to various forums, wikis and newletters. As a free "manual produced by the community for the community" it is an excellent effort; time and experience may well suggest to the team some better ways of doing things.