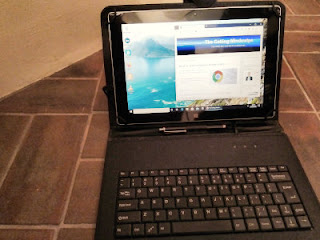 I received a hand-me-down Windows 10 tablet a couple of years ago. As a form-factor and software combo, it didn't initially thrill me with joy. So, more than two years later, what's it like living with a Linx 1010? The TL;DR conclusion is down below.

Linx Who?
The original Linx tablets made quite a splash in 2014/15 with good performance at a bargain price compared to the iPad. Late in 2016, the dubiously titled Linx 1010 Leather Edition hit the supermarkets for £139.

The Linx 1010 Leather Edition is named after its' slightly odd faux-leather backing, in grey. Interesting design choice. The tablet itself is built around a 10.1″ IPS screen, Intel Atom  Z3735F processor running at 1.33Ghz, 2GB of RAM and 32GB of flash storage, expandable via a microSD card slot. There's one micro-USB and one Mini-HDMI connector, on-board WiFi and Bluetooth 4.0.

None of that sounds especially world-beating compared to some of the Android tablets or the various iPads. But consider the price. Now consider it came pre-loaded with Windows 10 and the normal cost of an OEM license. It's a budget tablet with a full copy of the Windows 10 operating system. Which is both impressive and alarming knowing how resource-hungry Windows 10 can be. Hold that thought.

The screen got some lukewarm responses at the time. The resolution of 1280 x 800 at density of 149 pixels-per-inch was never going to challenge a Retina display. It wasn't intended to.

To my eyes, the display is more than fine; it's bright, clear and responsive. The touch sensitivity is absolutely fine given the tiny hot zones you get at that resolution on Windows 10. Most touch devices think I'm one of the undead and refuse to work most of the time. The Linx copes better than most. I often use a stylus on it with no problems.

I dislike typing on glass for the reason above. Shopping around, I realised the 1010LE had a different spec from it's Linx 10 siblings and also a different keyboard connector. The Linx 1010 add-on keyboard was eye-wateringly expensive at around £80 and rare as Dodo chicks. I opted instead for a no-brand generic tablet case with USB keyboard and stylus for under £25. Yes, it's cheap, it feels cheap, but it looks fine and it works. Plugged into the Micro-USB slot, it just works.

I could have gone with a Bluetooth keyboard and touchpad but they cost an extra £10-15, I don't like Bluetooth and I was hedging, anticipating only limited use of the 1010.

Here's the thing; of the four laptops we've had before and after the Linx 1010, the tablet is actually the best experience of Windows 10. I can even use it as a laptop replacement when I'm out and about; find a WiFi hotspot, pop out the kick stand and keyboard, away we go.

It's the Windows 10 thing that gets me. The Atom-powered Ideapad runs like frozen treacle. The Dell Inspiron Celeron limps along like an asthmatic sloth. The old Lenovo feels like Windows 95 on an original Pentium. The current Lenovo with an AMD-A9 and 8GB RAM should fly but it's like watching the progress of a glacier in real time.

The Linx tablet fair skips along. It dealt with the upgrade through 1909 and 2004 in the space of half a morning. Not each, together. The other machines needed half a day each or overnight. The Linx does whatever Windows does, faster than the laptops. Admittedly I wouldn't want to edit artwork for a book in Photoshop or GIMP, but it browses the web and social media better than anything else in the house without giving me terminal eye strain. It runs VLC and a bunch of other Windows apps just fine. Working in GSuites or Office365 via the cloud is also a breeze.

The rear 2megapixel camera on the Linx is not great, but what do you expect? The front-facing camera is adequate for video conferencing and that's all you need.

Did I mention the battery life is three to four times better than the laptops? That's not supposed to happen on Windows 10.

All in all, I wasn't expecting to be sitting here with a completely up-to-date Windows 10 install on a budget, four-year-old tablet, working at a speed that defies logic. It restores some faith in Redmond's output. Which makes you wonder where Lenovo and Dell went wrong? RC