My Lucid killed my GnomeShell 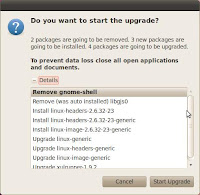 Version conflict?
Dependencies broken?
Or just too much like hard work?

Whatever the reason, when I ran a dist-upgrade on the Pentium-4 test box recently, Lucid Lynx 10.04 spontaneously decided of its own accord to remove GnomeShell! Granted it's not my favourite interface, deeply flawed in the current version, but for Lucid to take it out on it's own initiative?!

Question: just how does dist-upgrade decide what to keep and what to throw away? If I hadn't examined the list of packages affected, I wouldn't have known a thing until I tried to run GnomeShell next. Would the dist-upgrade have removed GnomeShell while it was running? This doesn't smell right.  RC
Posted by Robin Catling at Monday, July 19, 2010 No comments:

Full Circle Podcast #10: Trawling the Internet for a Goat Festival

Full Circle Podcast #10: Trawling the Internet for a Goat Festival


In this episode, the editors fight back.


The Ubuntu UK community and Canonical held an event yesterday to promote the uptake of... Ubuntu in business! Featuring all kinds of Ubuntu advocacy from indpendent software vendors, the UK Community and Canonical itself, we saw some eye-opening presentations, great chat, re-unions, the best and most refreshing panel discussion in years and some dodgy cocktails...

Among the keynotes, Chris Puttick, CIO of Oxford Archaeology described the strategic decision to adopt an open source infrastructure with Ubuntu at the heart of it. I missed the start, but Chris speaks knowledgibly and entertainingly without pulling any punches.

Among the vendor demos, Canonical showed the Landscape Ubuntu Enterprise Cloud management tool and later, made the pitch for Ubuntu Advantage, the new support service

Panel Discussion
For me the best of the 'formal' part of the agenda.


"A panel with members drawn from Canonical, partners and the community chaired by author and journalist Glyn Moody and loosely following the theme of "The Benefits and Pitfalls of an Open Source Strategy".

The panel consisted of:

Some good questions and comments from the floor, answers from Chris, Boris and Alan 'telling it like it is.' The two-way conversation was much appreciated by the delegates.


"Attendees are encouraged to stay on, sample an Ubuntini at the bar, have a chat and enjoy the comedy night hosted by the venue itself."

The Ubuntinis had a strange recipe that the bar-staff themselves hated and the delegates drank in a "spirit of experimentation" Since I'm on the wagon 10 years this month, I abstained.

I left 'early' around 7.30 having hung around the bar with Alan, Boris (who speaks English as a second language faster than our own Dave Wilkins!), Anton Piatek from IBM, Craig Box of Symbian and Gary Powell (lately open-source Adult-Ed instructor and Ubuntu guerilla-installer) among others. RC

Nothing less than a flood of media players have come to my attention in the last two weeks. In varying states of maturity, each has a new release getting attention.

What's the collective noun for a mixed bag of players? A cacophony of media players...?
Read more »
Posted by Robin Catling at Sunday, July 11, 2010 2 comments:

Man in an Ubuntu T-Shirt 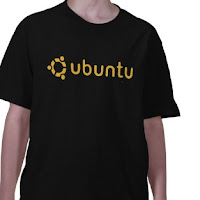 Last month in my local coffee shop (Caffe Nerd), I picked up my de-caff cappuccino (no comments about my metro-sexuality, please; they don't know what that is in my corner of Hampshire) and headed for a window seat.
The man walking up to the counter sported an Ubuntu t-shirt and hat. It was a complete shock. Aside from my pod-casting compatriot, Mr Dave Wilkins, I didn't believe anyone in this corner of Hampshire had even heard of Ubuntu, much less bought the t-shirt...
Read more »
Posted by Robin Catling at Friday, July 09, 2010 No comments:

Happy to help to spread the news, Ubuntu developer Week is back this month. In the organiser's own words:


"Ubuntu Developer Week is back again, which means five days of action-packed IRC sessions where you learn more about hacking on Ubuntu, developing Ubuntu and how to interact with other projects.

We’ll have a fantastic time from July 12th 2010 to July 16th 2010, great speakers, interesting sessions, lots of good questions and great people who get to know each other.

If you’re new to Ubuntu Developer Week and what it is, check out the general page, how to join in and how it all works.

"User Days was created to be a set of courses offered during a one day period to teach the beginning or intermediate Ubuntu user the basics to get them started with Ubuntu. User Days is a series of online courses where you can:

For the full programme of events go visit the User Days main page on the forums.

Full Circle Podcast #9: Playing a Unicycle and the Trombone out now


In this episode, a little later than scheduled; Unity, Gnome-Shell and UNE go head to head. 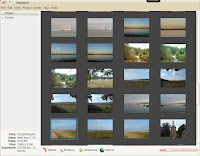 "Shotwell is a digital photo organizer designed for the GNOME desktop environment. It allows you to import photos from disk or camera, organize them in various ways, view them in full-window or fullscreen mode, and export them to share with others."

Shotwell is going to be the default  photo-management program in Ubuntu 10.10. It is also completely Mono-free. The project home is at http://www.yorba.org/shotwell...